Services Learn more about our Periodontitis

Periodontitis is inflammation of the gums and supporting structures of the teeth. It is one of the most common human diseases. 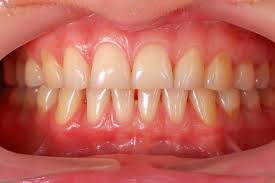 Periodontitis is caused by certain bacteria (known as periodontal bacteria) and by the local inflammation triggered by those bacteria. Although these periodontal bacteria are naturally present in the mouth, they are only harmful when the conditions are right for them to increase dramatically in numbers. This happens when a layer of bacteria and food debris, known as plaque, builds up and is left undisturbed on the teeth, commonly in hard-to-reach areas such as between the teeth.

What are the causes of periodontitis?

A healthy mouth is colonized by more than 700 different species of bacteria, most of which are completely harmless and live in harmony with their host. However, when tooth cleaning is not thorough enough, the bacterial deposits build up next to the gums, forming a plaque, and the conditions become suitable for more dangerous bacteria to flourish. The natural defences of the body are also compromised.

In all cases, periodontitis is caused by the build-up of bacteria in the form of dental plaque.

If the soft bacterial plaque is not removed by brushing, minerals are deposited within it over time and it becomes a hard deposit on the tooth called tartar. The presence of tartar encourages the growth of the bacterial plaque towards the tooth roots. As the inflammation progresses deeper, the attachment of the gum to the root is disrupted and a gap or periodontal pocket is formed between them. This pocket is an ideal place for harmful bacteria to colonize and in which to multiply, therefore driving the disease process forward. In their new habitat, the bacteria release toxins as products of their metabolism, which further trigger the body’s defence mechanisms.

Get Fixed Teeth In Three Days At Trisa Dental Solutions

Dial Local Number in your Country

Quick Connect : Know About Our Service